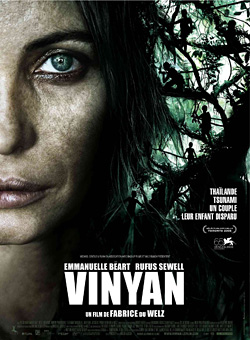 With its exotic setting, lush jungle cinematography and moody soundtrack, Vinyan, the long-awaited new horror film from Belgian director Fabrice du Welz, has all the makings of a genre-changing production. However, what starts out as genuinely intriguing subject matter, soon becomes a promising foray into into the criminal underworld of South East Asia, which then takes on the tedious tone of Captain Willard’s journey upriver in Apocalypse Now (1979), and towards the end of the film falls apart completely as characters become increasingly irrational and events more and more difficult to swallow.

Filmed in Thailand, Vinyan tells the story of a couple, Jeanne and Paul Belhmer (played by Emmanuelle Béart and Rufus Sewell), looking for their young son Joshua who was lost in the 2004 Indian Ocean tsunami. Jeanne sees video footage of trafficked children in Burma at a Phuket non-profit event and is immediately convinced one of these kids is Joshua. Paul, reasonably skeptical at first, eventually agrees to go to Burma and look for their son. With the hired help of local smuggler Thaksin Gao, the two board a boat and embark on their lengthy journey.

Although the un-eventfulness of this story is somewhat made up for by the beautiful cinematography, after a while boredom eventually does set in as Jeanne, Paul, Thaksin Gao and Gao’s assistant Sokghai sail from deserted beaches to abandoned shantytowns to isolated enclaves of civilization. Du Welz here does take a stab at adding some mysticism to his work via a surreal scene with a ghost ship and Thaksin Gao’s timely explanation about the titular vinyan, which means “angry spirit”. Unfortunately, these efforts are rare and far apart as the film relies primarily on its cinematography and setting for atmosphere.

Even so, the lack of permeating dread and suspense could be pardoned. Nothing, however, can make up for the stupidity that Jeanne and Paul gradually succumb to and that ultimately leads them to get lost in the Burmese jungle resulting in the film’s disgusting finale. Aside from its deeply troubled script, unnecessary displays of gore and occasional semi-racist remarks from some of the characters, there is nothing scary about Vinyan. The paint-smeared kids or their apparitions in the jungle simply make no sense and, as the director never bothers to explain their presence in any meaningful way, are consequently far from horrifying though they stone Jeanne and disembowel Paul alive.

While Fabrice du Welz, famous for breaking genre conventions in his first feature film Calvaire (2004), certainly has talent and remains a director to watch, Vinyan is a disappointingly mediocre effort and as such would be difficult to recommend. Clearly a lost opportunity, this film suffers from the lack of a good story, unconvincing performances and laughable thrills.

Masterfully crafted by director Anna Melikyan, Rusalka is clearly the work of an auteur as it effortlessly defies all attempts...