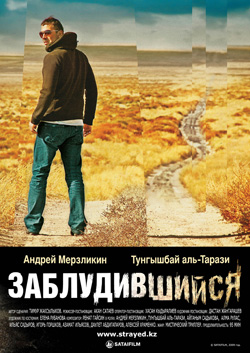 From Boratland comes Akan Satayev’s bold new supernatural thriller Strayed, an eerie, atmospherically rich effort of unprecedented quality for Central Asian productions in the genre. Building on the well-explored house-in-the-woods formula, the film infuses its dark tale of one man’s gradual descent into madness with uniquely Kazakh cultural imagery and psychological intricacy, making it all the more satisfying and unfamiliar to the international audience. In addition to delivering pure shock value, Strayed also pays homage to the modern mind-bending psycho-thriller trend popularized in such well-known recent works as Shutter Island (2010) and Inception (2010).

As the picture opens, a family of three are travelling in their Chevy Blazer through a vast, barren, seemingly endless steppe – and, predictably, soon find themselves loosing their way and driving in circles. It turns out they took this backcountry road instead of the much more-traveled freeway to avoid detection by law enforcement as their vehicle is loaded with smuggled drugs. Whether by coincidence or design, Satayev never reveals the names of his characters, making their plight appear strangely more personal and adding to the feel of realism that permeates the work.

After making a short stop, the SUV won’t start up again and while the Man (Andrey Merzlikin), our main protagonist, works under the hood to fix the mechanical problem, his wife and kid start to get anxious and annoyed, resulting in some unsavory things being said. Thus stranded in the middle of nowhere and no longer on speaking terms, the trio go to sleep in the car as darkness falls. Upon waking up the following morning, the Man finds himself completely alone in the vast emptiness with no trace of his two companions. 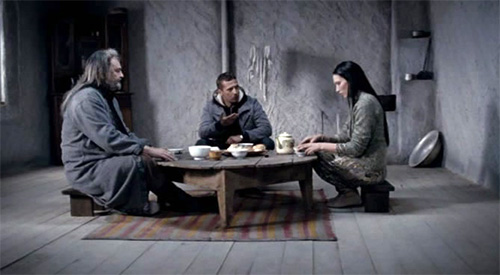 Figuring they must have gone to look for the highway on foot, he decides to take a look around and soon catches sight of the roof of a distant barn-like structure. On closer examination, this turns out to be a seemingly abandoned house in the middle of the steppe with several dusty rooms and wooden boards nailed across its windows. After making his entry, the Man discovers he is being watched by a large black dog, which vanishes as quickly as it appears. He then finds freshly baked bread in one of the rooms. While he marvels at the primitive furnishings used by the inhabitants of the steppe, an old man and a young woman make an unexpected appearance. “We’ve been waiting for you,” announces the old man without providing further explanation as he invites the stranger to drink tea. When questioned about the missing woman and child, he says he hasn’t seen anyone even though he, most suspiciously, does seem to know exactly what happened the night before and correctly points out that they disappeared while the Man was sleeping.

The old man goes on to mention that all major roads are many miles away and no phone service is available. Our protagonist, highly skeptical of what he has just heard and seen, excuses himself and returns to the SUV. He spends several hours walking in hopes of reaching the highway, catching occasional glimpses of the same black dog he has seen earlier prowling the desert landscape, and to his disbelief finds himself back at the crippled SUV with the young woman from the house in the steppe in the driver’s seat. She claims she came over to check on him and says mysteriously that he has been “summoned” – also without providing an explanation. After making one more unsuccessful attempt to repair his vehicle, the Man decides to return to the house in the steppe for another look and this time – with its inhabitants nowhere to be seen – finds a locked room and a water well he had not noticed earlier.

Tired and unable to leave, he spends another night in the SUV – this time haunted by strange noises and visions. Suspicion between the Man and the inhabitants of the house in the steppe continues to grow the next day as our protagonist, confused and disoriented, begins to gradually lose his mind. The Man’s behavior becomes increasingly erratic and his search for the missing family members more and more frantic by the hour. While much of what happens throughout the film may initially not make sense, it all culminates in a shocking finale when Satayev reveals the true identity of the old man and the young woman of the steppe, making all the pieces of this grand psychological puzzle fall perfectly into place.

Although the film’s Dostoevsky-lite storyline is not entirely original and the work is clearly not the masterpiece of character development it would like to position itself as, Strayed marks an important shift in the development of Kazakhstan’s post-Soviet cinema by signaling the emergence of an inward-looking national consciousness that is able to take a more genuine interest in the authentic Kazakh experience than big-budget copycat renditions of Hollywood blockbusters – incidentally the current fashion trend in nearby Russia – ever could.