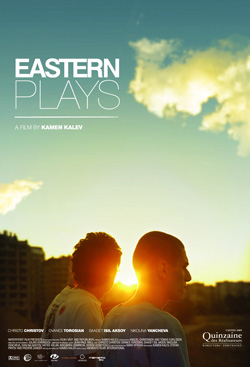 Part of the nascent renaissance in Bulgarian cinema, exemplified most prominently by Stephan Komandarev’s Oscar contender The World Is Big and Salvation Lurks Around the Corner (2008), Kamen Kalev’s new film Eastern Plays offers a much-needed fresh take on the modern Eastern European experience. In its subtle examination of the nature of nationalist and racist sentiment arising from post-Communist stagnation and threatening to pollute disoriented young minds, the film manages to go well beyond its localized context and will strike a chord with anyone who has ever found themselves in a dead end job or felt swayed by the opinions of others.

Like many people of his generation living in this part of the world, Itso (Christo Christov) is a twenty-something artist by profession and former drug addict working in a Sofia furniture shop, with few remarkable memories of the past and even fewer things to look forward to in the future. He takes methadone to alleviate withdrawal symptoms, goes out drinking with friends and spends the days feeling generally depressed. Meanwhile, Itso’s younger brother Georgi (Ovanes Torosian), a troubled and lonely young man living at home with his father and stepmother, secretly joins a gang of neo-Nazi extremists with shady political backing and appropriately shaves his head. Having in this way satisfied his need for social acceptance, he gets a tattoo on his arm and begins to hang out at heavy metal bars with his new buddies.

One day, Itso attempts to break up with his girlfriend Niki (Nikolina Iancheva) as he appears to feel unworthy of her affection. Niki, however, reminds Itso that it is her birthday and that night the two go out to eat at an upscale restaurant. In the midst of their dinner, Itso, not particularly enjoying the experience, says a few nasty things to Niki, prompting her to leave. While on his way home after having several more drinks, he stumbles into a group of skinheads harassing a family of Turkish tourists in a dark alley. In an attempt to protect the foreigners, Itso gets involved in the brawl and unexpectedly comes face to face with Georgi. Not only does this incident alter the relationship between the two brothers, but it also leaves a lasting impression on Itso who subsequently develops a friendship with Isil (Saadet Isil Aksoy), the adolescent daughter of the visiting Turks, and undergoes a personal transformation.

Eastern Plays is a very timely and important film that tackles a number of difficult social issues particularly relevant in the context of developing post-Communist societies of Eastern Europe. However, the film is much more than that as it tells the story of a lost man finding himself in despair who manages to regain hope and direction in life thanks mostly to his interaction with someone of a culture different from his own – and this gives it truly universal appeal. A special mention goes to Christo Christov, who sadly passed away shortly after filming ended, for his excellent portrayal of Itso.

Highly recommended viewing for anyone able to appreciate a thought-provoking, high quality cinematic experience, and especially for those looking to learn more about modern Eastern European culture and values, Eastern Plays is one film you will not see soon playing at a theater near you if you live in America.