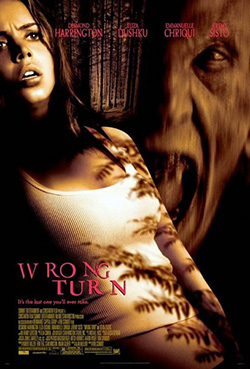 A stylish modern take on the classic American horror story, Wrong Turn remains an impressive example of horror cinema done right seven years after its initial release at the peak of the slasher genre revival in 2003. Due to the film’s superior production quality and commercial success, it’s hardly surprising several sequels have since been released, yet none of them manage to come anywhere close to rivaling director Rob Schmidt’s original vision. Although admittedly formulaic in terms of story, Wrong Turn handily excels in most other areas, particularly in high production values, refined cinematography, top-notch cast and pure entertainment value.

While driving one day through the mountainous landscape of rural West Virginia on his way to a job interview, Chris Flynn (Desmond Harrington) suddenly finds himself stuck in a traffic jam. Running out of time, Chris follows the posted signs to a nearby gas station to check the local map for an alternate route and is soon happily taking an unpaved detour via a certain Bear Mountain Road. Several miles later, he is distracted from driving by the sight a dead animal on the shoulder of the road and plows right into a stopped vehicle, rendering his car non-operable. Fellow stranded travelers Jessie Burlingame (Eliza Dushku), Scott (Jeremy Sisto) and Carly (Emmanuelle Chriqui) plus their friends Evan (Kevin Zegers) and Francine (Lindy Booth) soon show up and tell Chris they blew their car’s tires on barbed wire placed in the middle of the road. The six decide to go look for help and split up with Evan and Francine staying at their crippled vehicle to have a joint while the others trek a few miles down the road to the gas station Chris passed earlier. Naturally, things soon take a dark turn when Chris and his new acquaintances stumble upon a suspicious-looking house hidden deep in the Appalachian wilderness. 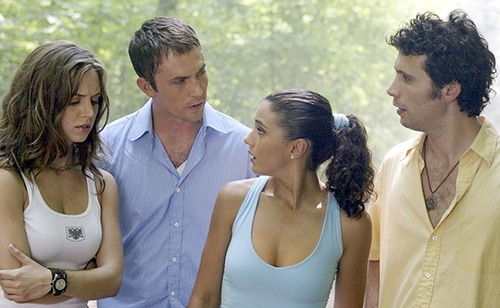 Wrong Turn takes a distinctly and exuberantly American approach to horror that builds heavily on 1970s genre classics like The Texas Chain Saw Massacre (1974) and Deliverance (1972) yet manages to offer an improved and tremendously refreshed take on the basic “wild man in the woods” experience. In a marked departure from the flurry of recent Asian entries in the genre, with Audition (1999) perhaps being the sole exception, there is nothing supernatural or otherworldly about the group of deranged psychos hunting the principal characters in Schmidt’s film. Set in an isolated mountain hamlet, Wrong Turn combines its finely crafted atmosphere of dread with the greatly amplified fear factor only spooks of flesh and blood are capable of inducing in the jaded modern viewer. The result is a much more vivid, terrifying and memorable experience than one that could be achieved through the use of metaphysical elements alone in a lesser film. With its numerous plot twists and gore fest visuals, the work is heavily predictive of genre trends prevalent in the latest crop of European slashers along the lines of High Tension (2003), Calvaire (2004) and the more recent Martyrs (2008).

With a total runtime of just 84 minutes, Wrong Turn moves at breakneck pace from its outset to the ending credits – almost never boring the audience with genre staples like cheap scares and inconsequential rounds of talking. Additional kudos goes to Rob Schmidt for his wonderful taste in cinematography, sound effects and cast selection.

Wrong Turn is an easy film to recommend to anyone looking for a quality American work of horror with elements of gore and a good measure of suspense.

Like life itself, Sean Ellis' film Cashback is a fleeting, vibrant and bittersweet experience, with its ups and downs masterfully...