In choosing Uncle Boonmee Who Can Recall His Past Lives to receive the Palme d’Or award, a decision which effectively ensured the Thai art film’s international distribution and exposure to a wider audience, the jury at this year’s Cannes Film Festival surely forgot to mention an important detail about their selection process – precisely what it was they’d been smoking. Loved by critics, loathed by audiences, this work is nothing more than a painfully dull, needlessly dragged out series of random, amateurishly shot sequences and stills so profoundly uninteresting and pointless you’ll soon find yourself wishing Uncle Boonmee took less time to die.

The film opens with slow-moving pans of animals grazing in the night jungle watched by a mysterious ape-like being, which pretty much sets the intriguing yet monotonous, thoroughly uninspiring tone that carries through the rest of the picture. Uncle Boonmee, on kidney dialysis treatment, is introduced driving through rural countryside to a place where he plans to spend the final days of his life with close family members. Soon after Boonmee’s arrival, the ghost of his dead wife manifests itself at the dinner table and a bit later his long lost son Boonsong makes an appearance in the form or a bizzare-looking large monkey spirit with glowing red eyes. After conversing with both apparitions extensively, Boonmee begins to hallucinate and the work disintegrates into short visions of events from his past and future lives. 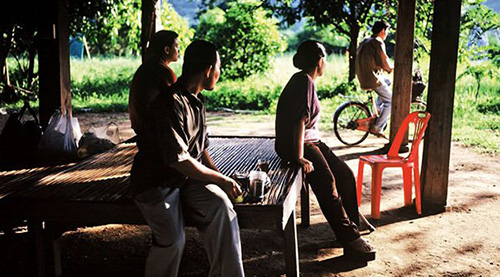 With all due respect to director Apichatpong Weerasethakul and his non-materialist sensitivities, what he has created here cannot be adequately described as a film – much less a “supernatural drama” – for a film needs to have at least a rudimentary plot structure and Uncle Boonmee is a disjointed collection of standalone scenes. The content of these mini-vignettes varies considerably from scenes of talking catfish behaving erotically to pleasure an aging princess when the latter goes for a swim to still shots of child soldiers armed with automatic weapons taking into custody the mysterious ape-like beings of the forest. Much of this absurdity is no doubt highly symbolic and perhaps rooted in traditional Thai folklore. Yet, with no explanation of anything that happens provided to the uninformed international viewer, the significance of such cultural references loses its value and they become worthless abstractions. 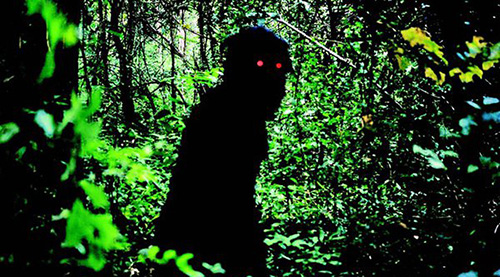 Prevalent throughout the film, however, is the sentiment of extreme ennui, a lifeless feeling of being suspended in time against one’s own will and waiting for this dark nightmare to finally be over. Stationary shots of the forest canopy or the interior of Boonmee’s house in the countryside are purposefully timed to last 20-30 seconds each, supposedly to convey the experience of Buddhist meditation. In other scenes, like those inside a remote cave Boonmee travels to, the footage is so shaky and unprofessional one can’t help but wonder if this film cost more to make than The Blair Witch Project (1999). In a particularly memorable sequence that lasts several minutes, a monk is shown showering – again, with no explanation for the length or the significance of this episode.

Unless your speciality is traditional Thai culture, it is difficult to comprehend how anyone not on acid might actually find watching Uncle Boonmee an enjoyable experience. If you’re still not convinced, however, try making this your movie choice with like-minded individuals on April Fools’ Day – and don’t forget to stay classy and have some wine before and after the experience.

Pretentious, pseudo-intellectual trash like this “award-winning” picture is what gives foreign films a bad name in America. Endorsement from lunatics compounds the effect. Suffice it to say we’re out to change all that, so consider this article the first step.