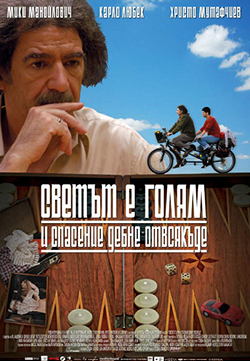 As if to reaffirm the nascent uptrend in Eastern European cinema, Bulgarian director Stephan Komandarev’s 2009 Academy Award nominee The World Is Big and Salvation Lurks Around the Corner arrives on the heels of Ilmar Raag’s excellent feature Klass (2007) and Cristian Mungiu’s Palme d’Or winner 4 Months, 3 Weeks and 2 Days (2007). Centered around the themes of immigration and associated cultural dislocation, the subject matter of Komandarev’s film is evidently less sexy than hot topics like high school violence or abortion, which explains the muted critical response and limited distribution that have plagued this title, unheard of among international audiences.

Yet, in terms of offering an accurate account of the post-Communist Eastern European experience, Komandarev hits the nail on the head with his portrayal of Sashko, a young German-Bulgarian man living a life rich in comfort and material possessions, yet strangely lacking in meaning. A tragic auto accident inadvertently leads to Sashko’s gradual rediscovery of his Bulgarian roots over the course of a road trip he takes with his grandfather Bai Dan, making the young man’s search for identity one of the film’s key motifs.

Based on Ilija Trojanov’s novel published in 1996, the picture offers a creative exploration of the last few decades of Bulgaria’s totalitarian history as told via the apolitical lens of the life of a family. While plot developments tend to be consistently predictable and Komandarev clearly do not shy away from moments of cliché, his work has an important message for its audience: as Bai Dan succinctly puts it, that “life is like the dice in our hands; fate is determined by the skill and luck of the player.” 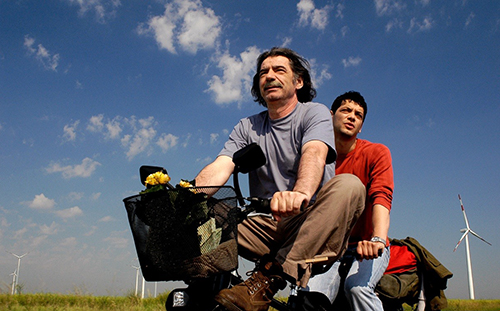 Sashko and Bai Dan’s bicycle odyssey through central Europe and the Balkans is not only a physical but also a symbolic journey that takes the uprooted Sashko across a vast gulf of cultures from the present to the past, from modernity to tradition, from Germany to Bulgaria. The director’s choice to intersperse scenes from the present day road trip with flashbacks from the past appears to be an indirect way of reaffirming the possibility and importance of rediscovering one’s cultural heritage, however foreign or remote it may seem to be.

Beautifully filmed and edited on a shoestring budget, the work impresses on many levels with its purity, aesthetics and unbridled enthusiasm for life. There’s something inexplicably epic about this film, thanks in large part to Komanderev’s ability to paint an eloquent picture of the Bulgarian experience comparable to that crafted by Giuseppe Tornatore in Cinema Paradiso (1988) of its Italian counterpart.

The World Is Big and Salvation Lurks Around the Corner is a truly beautiful, mesmerizing film and no doubt one of the greatest ever made in Bulgaria. Together with Kamen Kalev’s more recent but equally outstanding production Eastern Plays (2009), Komandarev’s work puts the country on the cinematic roadmap of Europe, signaling the emergence of its film scene from post-Communist decline.

Easy to recommend to most audiences, this is one title you will want to go out of your way to see because, if nothing else, it will surely rekindle those old college dreams of backpacking across Europe.