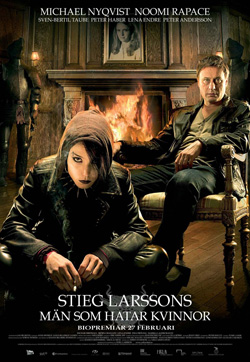 Following on the heels of vampire love story Let the Right One In (2008), is another runaway hit from Sweden, The Girl with the Dragon Tattoo. A faithful cinematic adaptation of the bestselling novel by far-left writer Stieg Larsson, the picture offers a foray into the world of ultra-capitalist crime and greed. Although Larsson’s obviously skewed world view and its influence on his work remain the subjects of popular controversy, the massive posthumous success of his novels is remarkable indeed. Having taken Europe by storm, the film – well on its way to becoming a new cult classic – is now set to premiere in the US.

What might one expect from an offering whose title translates literally from Swedish as “men who hate women”? Yes – you guessed it – certainly lots of nastiness and some very bad ex-Nazis turned into ruthless capitalists in the socialist-leaning mind of Stieg Larsson. Based on the first installment in Larsson’s Millennium Trilogy of crime novels, The Girl With the Dragon Tattoo introduces its audience to the two main characters that reappear throughout the series – the disgraced journalist Mikael Blomkvist (Michael Nyqvist) and young computer hacker Lisbeth Salander (Noomi Rapace). As the film opens, Mikael Blomkvist, having recently lost his job following a media scandal over accusations of slander, takes up the offer of local businessman and longtime contact Henrik Vanger to open a private investigation into the mysterious disappearance of his niece Harriet some thirty years earlier.

As Blomkvist goes to work studying old photographs, combing through the pages of Harriet’s diary and making inquiries with the locals, he is being watched. Lisbeth Salander, a geeky computer hacker of questionable orientation wearing black lipstick, nose rings and emo outfits, gains access to files on Blomkvist’s laptop and tracks him as he travels from the safety of Stockholm to Vanger’s remote residence tucked away in the dreamy countryside. Lisbeth is a social outcast who struggles to make ends meet stealing information for clients and is sexually abused by her new “guardian”. When one day Blomkvist comes across a riddle of Bible verses in his investigation he cannot seem to decipher, Lisbeth promptly emails him the solution. Bewildered, Blomkvist proceeds to locate and contact Lisbeth. He then asks her to help him find Harriet.

What follows is a tale of murder, deception and vengeful Nazi capitalists in the course of which Blomkvist manages to get to the bottom of the mystery surrounding Harriet’s disappearance and develop an unlikely romance with Lisbeth along the way. Their relationship, however, remains strangely dysfunctional as the duo unravel scores of serial killings and eventually become targets of the bad guys, even though Blomkvist attempts to find additional common ground with Lisbeth.

Predictably, the greatest villain of all turns out to be one of the Vangers themselves and a point is made of wealth-induced greed and willingness of the rich to commit crime. It is also no accident that both of Larsson’s main characters are financially strained people left (undeservingly, we must assume) on the fringes of modern society: Blomkvist loses his job for trying to expose corporate corruption and Lisbeth is sexually exploited in return for money. While Larsson’s political agenda here is clear, the film’s treatment of these traumatized individuals is a far cry from that of similarly alienated characters in the works of such auteurs as South Korean director Kim Ki-duk whose films generally focus on the disadvantaged.

It is truly a shame Larsson did not live to see the phenomenal success his novels and the films based on them are enjoying today both in his native Sweden and internationally. Although a bit overrated, The Girl with the Dragon Tattoo can be an enjoyable way to spend the evening if it is mystery you seek and do not mind the slow pacing and subtitles. However, it is at best a popular cult film – clearly not the new artistic masterpiece some have made it sound to be. Yet, with Sony Pictures’ recent acquisition of remake rights, the future looks bright for just about anything that is connected to Larsson’s Millenium Trilogy.