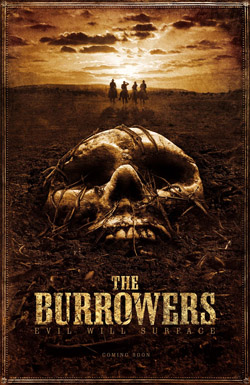 One of the year’s more anticipated horror releases, J.T. Petty’s The Burrowers starts out promisingly in 1879 with mysterious killings of white settlers in the Dakota Territories set against the under-explored backdrop of the Old West. After a family is brutally murdered one night, an army captain is called in to investigate and track down natives presumably responsible for the crime. With this great premise, the film initially has much going for it, but as their lengthy expedition drags on, the central characters seem to gradually lose common sense and the novelty of the director’s generally cheap scare tactics gives away to apathy and ultimately infinite boredom.

Our protagonist, the Irishman Fergus Coffey (Karl Geary), joins a rescue party upon learning of the tragic disappearance of his fiancée and her sisters and the slaughter of their family. Led by the openly racist army captain Henry Victor (Doug Hutchison), the group of local trackers and freed slaves ride deep into the lands of the Sioux Nation looking for natives to capture and torture so as to learn the whereabouts of the missing settlers. Yet, when they torture one, he tells them the girls were taken by the Burrowers, which the simple-minded trackers assume to be a previously unknown Ute tribe. As members of the expedition begin to vanish into the night, however, the hapless rescuers finally realize they are being hunted by something far more sinister than anything they had previously imagined. 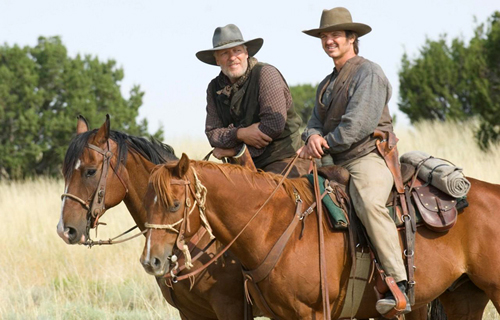 Confusion and disagreements result in the rescue party splitting up, with Coffey and a few other men abandoning Victor’s command and setting out on their own. Before long, they find a girl’s body, freshly killed and buried under a tree. For Coffey, who has long suspected there might be more than just Indians lurking in the shadows, this proves to be a definitive moment as he begins to connect the dots between the sightings of strange holes in the ground, the presence of unusual wounds on victims’ necks and the terror of the natives when they speak of the Burrowers. The rest is soon revealed by some friendly Indians who explain that according to ancient legend the Burrowers are subterranean monsters that have for centuries fed on buffalo until white men arrived and destroyed the creatures’ food supply. 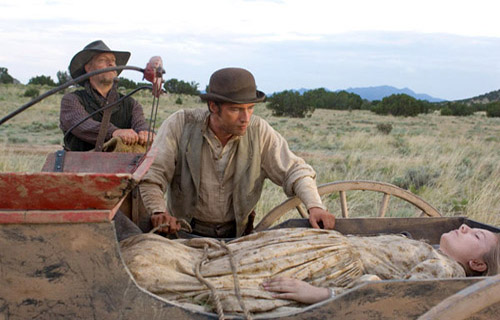 Although Burrowers scores points early on for its intriguing premise and unusual setting in the Old West, these gains are quickly overshadowed by slow pacing, uneventful scenes and general dullness of the picture. Events do pick up slightly in the second half, but the action still remains very low-key with the slasher flick atmosphere already ruined by excessive babbling on boring topics in the preceding 40 or so minutes.

A budget-oriented cross between The Descent (2005) and Tremors (1990), The Burrowers has great potential at its outset, which it proceeds to unscrupulously squander in its misguided efforts to present itself as a Western, and ends up being little more than just another creature-feature. Watch this at your own risk; generally not recommended.