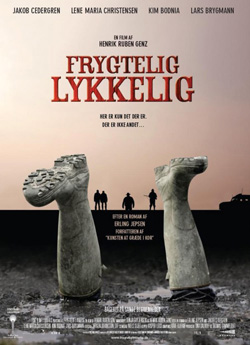 Among the countries of the world, Denmark is known in some circles for Hans Christian Andersen and perhaps more generally for good beer, but certainly not for its contributions to the field of world cinema. Yet, if director Henrik Ruben Genz’s Terribly Happy is any indication, this may be about to change. With its uniquely Scandinavian atmosphere of eerie moroseness permeating every shot, this well-paced suspense builder is the work of a talented auteur, an artistic triumph that sets itself apart from like-minded films by focusing on the quality of the experience it delivers rather than settling for cheap thrills.

Set in the remote swamps of south Jutland, a God-forsaken corner of northern Europe, Terribly Happy follows the story of Robert Hansen (Jakob Cedergren), a disgraced Copenhagen police officer sent to establish order in the boonies and recover from his nervous breakdown. Upon arriving at his assigned location, Hansen finds trouble abrewing in the rural community of small-town rednecks somewhat reminiscent of America’s Old West. The locals are a suspicious bunch, always seemingly hiding something and clearly not excited to see a cop from the big city. In a bid to protect the primitive townsfolk from each other, our protagonist quickly finds himself caught in a murky quagmire of complex relationships, a dangerous quicksand that threatens to swallow the outsider in its depths. 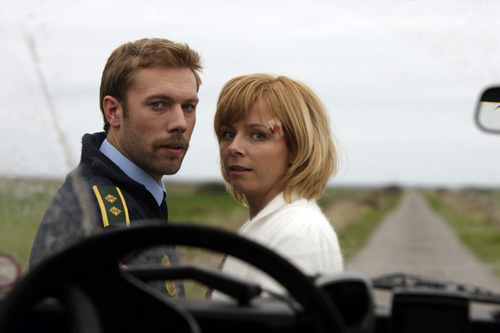 It is at this point that the allegorical opening narration about a cow getting stuck in a bog and reappearing six months later to give birth to a two-headed calf that brings misfortune to the locals and is placed back in the bog actually begins to make sense. Much like that prophetical cow, Hansen naively muddles into an alleged domestic violence problem between Ingerlise Buhl (Lene Maria Christensen) and her husband Jørgen (Kim Bodnia) with disastrous consequences which leave him with blood on his hands and, of course, even deeper in the bog. To escape criminal prosecution, Hansen inadvertently frames the abusive Jørgen for something the latter has not done, and hopes to be done with it – until it turns out others may be well aware of what really happened.

At first, feeling the weight of his guilt, the unlikely law enforcer acts to protect Jørgen from the townspeople’s fury. A cat-and-mouse game then ensues, in which Jørgen, who continues to maintain his innocence, attempts to find faults with Hansen’s story and clear his own name. After he publicly challenges Hansen to a drinking contest at the local pub, however, things start to take a dark turn as the latter is left with no choice but to get rid of Jørgen who incidentally stumbles across a critical piece of evidence disproving the police officer’s story. 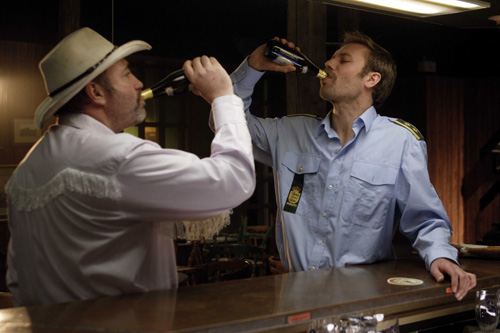 Although marketed primarily as an atmospheric thriller, at its heart the film is an elaborate character study that meticulously details the psychological transformation of a man placed in a challenging context outside of his familiar environment. Civilized and soft-spoken, Hansen – a product of Copenhagen haute couture and its sensibilities – is radically changed by his experience in the backwater Jutland town of Skarrild, where violent behavior is an accepted fact of life and everyone appears to be a suspect. Reluctant to hit a shoplifting kid immediately after his arrival, Hansen has no problem giving that same kid a generous smack just days later, and by the second half of the film he completely loses it, picking up a gun.

Denmark’s Foreign Language Oscar submission for 2010, Terribly Happy is set to be remade in English by its director Henrik Ruben Genz on an estimated budget of about $20 million. Of course, this fact alone speaks volumes about the originality of the work, which – coupled with masterful direction and enthralling suspense – makes the film stand out as a classic example of neo-noir storytelling done right. While hopes for the remake are high, Genz has some serious work to do if its quality is to rival or surpass the original.

With plenty of action, a story built around a flying vintage car and presentation bordering on magical realism, Black Lightning...