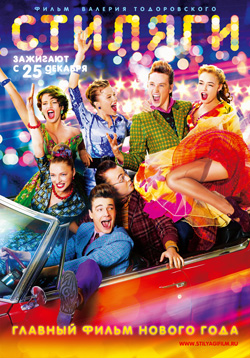 Musical comedy is hardly a genre most people would associate with modern Russian cinema. Traditionally known and respected for such somber and inquisitive works as Nikita Mikhalkov’s Burnt by the Sun (1994), Andrei Zvyagintsev’s The Return (2001), and Aleksei Balabanov’s Cargo 200 (2007), post-Soviet Russian directors had generally focused on negative aspects of the Russian experience until the early 2000s, when waves of cash flowing from the country’s oil and gas-fueled economic boom finally reached the film industry, resulting in the production of commercially-oriented blockbusters such as Night Watch (2004) and The 9th Company (2005).

Continuing this trend and taking it in a new direction is Valeriy Todorovskiy’s new film Stilyagi (Hipsters). Featuring an all-star cast, dynamic script and slick cinematography, Stilyagi takes the viewer on an epic joy ride through 1955 Moscow, two years after Stalin’s death. At the height of the Cold War in the Soviet Union, the titular stilyagi were a bunch of Western-oriented hipsters who loved jazz, exhibited questionable morals and enjoyed dressing with style. Mels (Anton Shagin), a seemingly brainwashed member of the Communist youth group Komsomol, falls in love with Polza (Oksana Akinshina) while raiding an illegal underground nightclub. Polza invites Mels to join her and her friends on the “Broadway” and Mels is dumbfounded when he shows up to the party dressed plainly and looking apologetic. Striving to win Polza’s attention, Mels utimately abandons Komsomol and joins the stilyagi, chasing after Polza comically throughout the rest of the film as he learns to play the saxophone, dance jazz, and dress like a movie star. 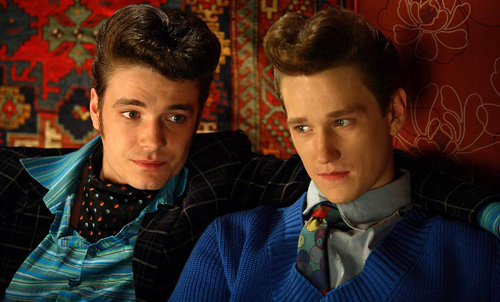 The high production values combine brilliantly with hilariously written song lyrics and a beautifully composed soundtrack to produce a musical comedy of exceptional quality. Every scene, every detail – from the film’s color composition to Mels’ name (which we eventually learn stands for Marx Engels Lenin Stalin, the four “fathers” of Communism) – has been thought out and serves a unique purpose. Unlike most musicals, Stilyagi never bores the viewer with superflous dance numbers or pointless art scenes as its musical elements are so finely interweaved with the story and the lyrics so funny and intellectually stimulating, one would seriously need to have taken tranquilizers to fall asleep.

Another upside is the contentious issue of the film’s historical relevance and its representation of mainstream Soviet society as a mass of grey, same-looking, pathalogically repressed people who are – as the lyrics put it – “chained with one chain, joined by a single goal [Communism]” (“skovanie odnoj tsepyu, sviazanie odnoj tselyu“). Stilyagi makes an important point by painting outcasts as those elements in society that have not lost their sanity amid the insanity so prevelent in the mainstream and reinforces this idea in the film’s final scene where Mels and Polza are running with modern punks through the streets of present day Moscow. Another observation to make here is how incredibly pro-American this film is. In Stilyagi, the United States and its cultural products are presented as offering a much-needed escape from the Soviet Union’s monotone world of the jlobi (“hicks”). Ironically, the stilyagi‘s superficial perception of Western culture always remains distinctly Russian, and the film illustrates this in the scene where Fred shares his impressions of America with Mels. 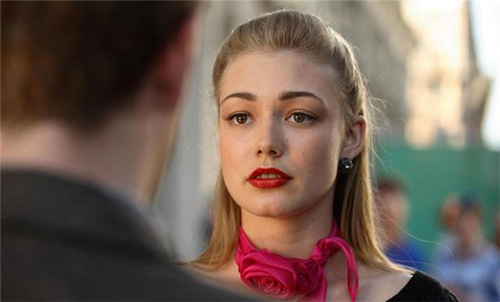 Stilyagi stands out as a meticulously crafted musical comedy that sets a new benchmark for Russian productions in its genre. Its original storyline and refreshing energy are complemented by gorgeous cinematography and an amazing soundtrack. The lightheartedness of the film is endearing and makes it highly accesible to an international audience. Those looking for a feel-good movie will not be disappointed, while those craving social commentary or a more intellectual experience will surely find it by paying attention to minute details and looking beyond the gloss. All in all, a joy ride recommended without reservation to anyone in the mood for something funny and different.

Let the Right One In (Låt den rätte komma in) Review

Strangeness abounds in the otherworldly vampire love story Let the Right One In from Swedish director Tomas Alfredson.