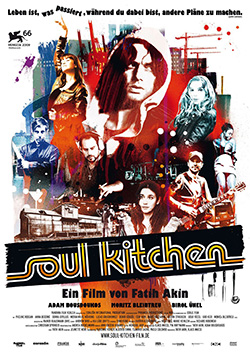 Vibrant, kinetic and beautifully shot, Soul Kitchen – the newest offering from award-winning Turkish-German director Fatih Akin – centers on the motivational story of a local restaurant’s efforts to restructure its menu choices and attract new clientele. In a break from Akin’s previous more dramatic and culturally rich works such as Head-On (2004), In July (2000) and The Edge of Heaven (2007), Soul Kitchen treads lightly with its gentler approach to life and occasional moments of humor, making this film to cinema what crème brûlée is to dessert: an exquisite and highly delightful concoction to be savored at leisure and preferably in the company of a friend or two.

In Hamburg, a ragtag cast of characters made up of troubled business owner Zinos Kazantsakis (Adam Bousdoukos), his fresh out of jail unemployed brother Illias Kazantsakis (Moritz Bleibtreu) and Spanish waitress/bartender Lucia Faust (Anna Bederke) find their livelihoods threatened by a slowdown in business at Soul Kitchen, a late night restaurant and hangout spot situated in a dilapidated urban warehouse on the outskirts of an industrial area, after the formerly high-end chef Shayn Weiss (Birol Ünel) newly hired by Zinos decides to give the establishment’s traditionally-oriented menu a dramatic New Age makeover. Faced with a dwindling customer base, legal threats from state health regulators and federal tax liabilities, Zinos begins to seriously wonder about selling the business and relocating to Shanghai where his girlfriend Nadine (Pheline Roggan) is spending time on a foreign exchange program. 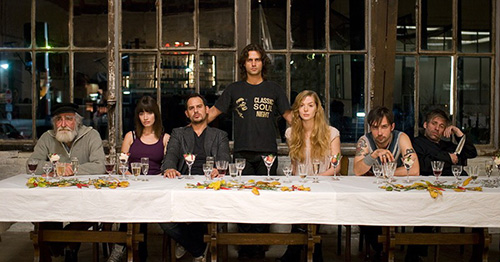 When their sound system is confiscated by a visiting internal revenue officer as retribution for long overdue taxes, Soul Kitchen opens its doors to a band of practicing musicians who start doing live in-house performances attracting large groups of starving fans. This new crowd is better able to appreciate Shayn’s creative food making talents and business gradually starts to pick up again. Illias in the meantime manages to obtain professional audio equipment from a local nightclub with the help of some muggers and becomes the restaurant’s de facto DJ. Shayn, for his part, imports a potent new spice from Honduras which he makes sure to add to desserts in ample quantities, producing in guests a strong aphrodisiac effect on par with Viagra. The results? Nights at Soul Kitchen now begin to the sounds of groovy bossa nova, progress gradually as the loungey atmosphere builds in anticipation of the live performance, culminate in a mass make-out session followed by an all-out orgy, and end with broken glass and sleeping bodies littering the floor. 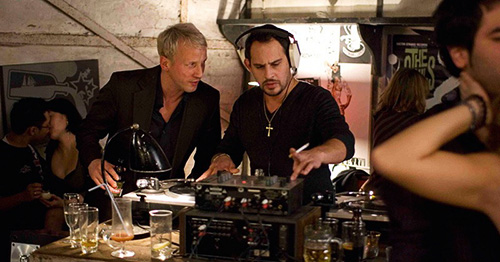 With business booming and the roomy warehouse quickly becoming the scene of the coolest parties in town, Illias strikes up a romance with Lucia while Zinos develops a slight crush on his physiotherapist Anna (Dorka Gryllus). To Shayn’s delight, his culinary creations really take off, finally finding a truly receptive audience. In preparation for the trip to Shanghai, however, Zinos makes the mistake of granting Illias equal legal rights to his business. Fate then takes a sharp turn at the airport when Zinos spots Nadine who is back in Germany temporarily to attend the funeral of her grandmother. He cancels his flight and upon returning to Soul Kitchen discovers that Illias has sold the place off to settle a gambling debt with local businessman Thomas Neumann (Wotan Wilke Möhring).

Soul Kitchen is a dynamic picture that hits the ground running and never slows down, with life relentlessly throwing punch after punch at its central characters, keeping the audience on the edge of their seats. While the story itself may be relatively straightforward, it is the work’s masterful direction, execution and presentation that really make it shine and ensure it stands out from similar efforts. Complete with an excellent soundtrack and impressive visuals, this is one film you won’t want to miss.

Following in the footsteps of Philippe Claudel's recent French drama about an ex-convict's readjustment to civil life I've Loved You...