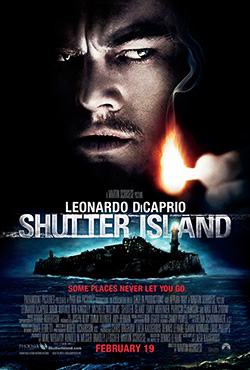 With Martin Scorsese in the director’s chair and such prominent names as Leonardo DiCaprio and Ben Kingsley attached to star, the much-anticipated Shutter Island had high audience expectations to fulfill from the moment it was announced. Hence, the commercial success of this outstanding suspense thriller is particularly impressive as it appears to have been achieved organically, without resorting to a watered-down scenario or cheap scare tactics. In Shutter Island, Scorsese manages to walk a thin line between delusion and reality while at the same time delivering a work that remains highly entertaining throughout its entire 138 minute runtime.

Set in the 1950s, the film opens with the arrival of U.S. Marshal Teddy Daniels (Leonardo DiCaprio) and his partner Chuck (Mark Ruffalo) at the titular locale off the coast of Massachusetts where they are to investigate the mysterious disappearance of a dangerous patient from a high security mental institution for the criminally insane. From the get-go, something about Shutter Island does not seem quite right as the duo are greeted by armed personnel and taken to a menacing-looking fortress housing the mental patients to meet the facility’s director, Dr. John Cawley (Ben Kingsley). Scorsese steadily builds tension as the new arrivals pass on their way a memorable plaque with the encryption “remember us for we too have lived, loved and laughed,” with the island’s chief security officer insisting that during their stay the federal marshals will be required to “obey protocol” and demanding they surrender their weapons before entering the fortress.

Enigmatic Dr. Cawley appears deeply suspicious of the visitors and displays a general lack of interest in cooperating with the official investigation. Thus, after doing a series of interviews with patients and members of personnel, the Marshals decide to take matters into their own hands and launch a de facto search of the rocky outcrop. Unsurprisingly, they soon stumble upon some rather peculiar discoveries suggestive of foul play on the part of the island authorities.

As evidence of a coverup gradually builds, Scorsese skillfully interweaves vivid flashbacks from Teddy Daniels’ troubled past to create a sort of subtext which eventually outgrows its periphery position and makes inroads into the main storyline. As we find out more about Teddy, unsettling conclusions begin to emerge and the situation rapidly spirals out of control, resulting in a dramatic finale not unlike William Golding’s classic work Lord of the Flies.

Although the hype that surrounded Shutter Island ahead of its theatrical release – dutifully amplified by trailers featuring chill-inducing elements of elemental horror – would perhaps lead the prospective viewer to expect something along the lines of a supernatural slasher, the film at its heart is in fact a meticulously crafted dramatic character study, not a gore-fest. That being said, this is certainly not the picture to see for the faint-hearted as Scorsese, a master of suspense and playing mind games with his audience, will consistently keep you on the edge of your seat throughout the film and leave you questioning not only the sanity of the protagonists but also your own by the time it ends. Dark, brutal, and highly recommended.