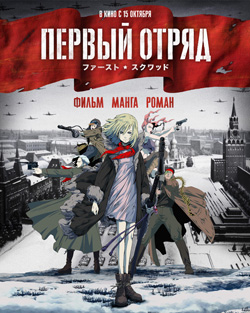 Coming back from a screening of the Japanese/Russian anime First Squad at the San Diego Asian Film Festival, it is certainly not easy to settle on a final verdict for Yoshiharu Ashino’s new production. With its grim historical subject matter uncommonly serious for an anime, an intriguing narrative premise and beautiful visuals interspersed with real-life interviews with Russian and German World War II veterans, First Squad clearly treads on territory unfamiliar to traditional anime audiences, and ultimately succeeds – at least in some respects.

Set in the bleak winter months of 1942 on the Eastern Front, the film focuses on the story of Nadya, a girl with extrasensory abilities who has managed to escape the Nazis as they wiped out her fellow members of the First Squad, a secret organization within the Soviet 6th Division. Saved by her friend and helped by a priest, Nadya rides into Moscow under siege on a white horse and stops at the Kremlin gates begging to see a mythical General Below who should have an important mission for her to complete. 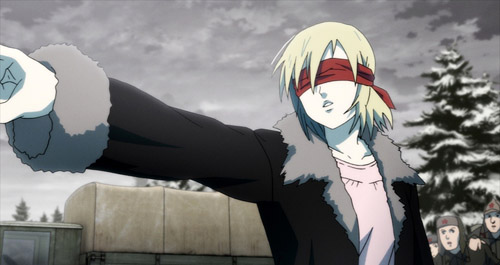 While these actions initially land her in a mental asylum, General Below does eventually appear and takes Nadya to the Kremlin as she requested. The Anenerbe, it turns out, an elite division of dark mages within the Nazi SS, has been experimenting with novel ways to improve the potency of German forces and their latest initiative has been to make contact with the spirit of Germanic warrior Goth Baron von Wolff who perished in battle with the Russians in 1242 and has vowed to return from the dead in 700 years. To stop this hellish Teutonic apparition, Nadya is given a Japanese katana and sent to Gloomy Valley – the final resting place of fighters killed in battle – via a secret machine designed by the Soviets to bridge the realm of spirits and that of the living, the Sputnik 01. 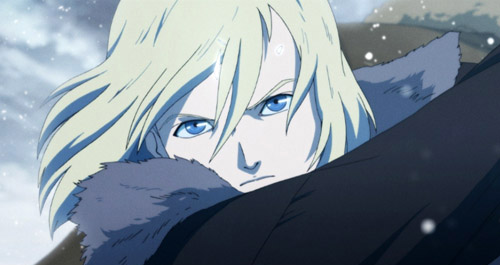 While offering an interesting Russian perspective on World War II, the directors of First Squad clearly went a bit too far by pausing the anime every couple of minutes for interviews with Russian and German veterans and historians who are meant to provide historical context for what is happening on the screen. Although this documentary approach does build up credibility for the film’s subject matter, the constant interruptions are completely unnecessary – and, frankly, annoying – as the interviews could have easily been cut down and placed before or after the main film to let the work speak for itself, or even saved for a making-of DVD feature. This is particularly troubling since the overall runtime is a mere hour and thirteen minutes, which gives the film an air of being an episode rather than a standalone work.

With its supernatural subject matter, surrealistic storytelling and mythical imagery, First Squad has the makings of cult classic, and it could have been a much richer and more epic experience had the team at Studio 4°C chosen to leave the disruptive veteran interviews on the cutting room floor and extend the feature by another hour. Nonetheless, even with its shortcomings, First Squad would a safe bet for anime fans, World War II buffs and those interested in experimental cinema.

Just when you thought the international film circuit may potentially be running out of steam, from Estonia comes Ilmar Raag's...