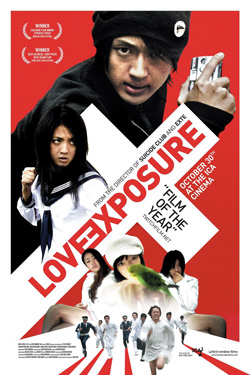 Massive. Ridiculous. Complex. It seems foolish to even attempt to describe Shion Sono’s four-hour-long exercise in absurdity Love Exposure, the film that turned heads at the Berlinale earlier this year and rapidly developed a cult following of otaku fans. Edited down from its original runtime of six hours, Love Exposure is epic in every sense of the word: it is at once a powerful meditation on religion, an allegorical commentary on sexuality in the modern world, a highly entertaining commercial production and an odyssey of sorts into Tokyo’s bizarre Akihabara subculture. While some may love it and others hate it, this film is unlikely to leave anyone indifferent.

From the get-go Sono’s work surprises by exploring some uncommonly serious ideas about religion as we are introduced to our main protagonist Yu Tsunoda (Takahiro Nishijima) and his father Tetsu (Atsuro Watabe), who becomes a Catholic priest after the passing of Yu’s mother. Next, the director throws a bit of reality into the genre mixer with the appearance of the emotionally unbalanced middle-aged woman Saori (Makiko Watanabe) during one of Tetsu’s heartfelt sermons. Right away, Saori seems unnaturally obsessed with becoming a Christian, purchases a Bible the same day and soon gets baptized – only to confess her sudden love for Tetsu a short while later. 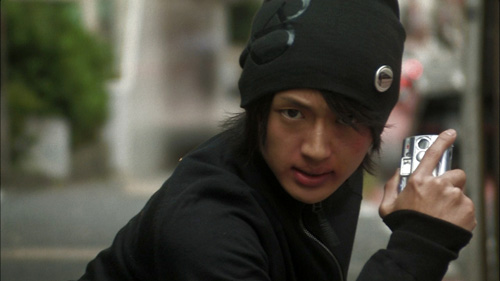 Initially reluctant due to his religious commitment, Tetsu eventually gives in to Saori’s advances and rents a house for himself, Yu and Saori away from the parish. However, a few months later, Saori leaves him for a younger lover after Tetsu refuses to marry her. With his heart broken, Tetsu’s sermons become more and more malevolent and he begins to question Yu daily about his sins. Unable to find a common wavelength to communicate with his emotionally distant father, Yu tries hard to please Tetsu by thinking up all kinds of little things to confess – like killing ants or failing to help an old lady cross the street – but eventually he begins to run out of these minor “sins” and Tetsu accuses him of not being serious. 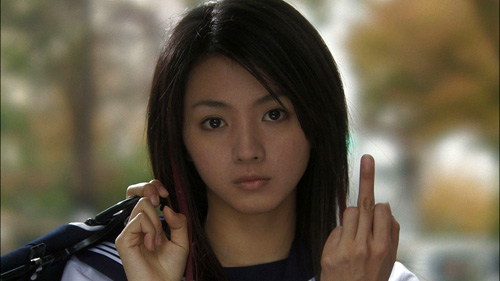 To remedy the situation, Yu starts committing more real sins that range from being mean to his classmates to breaking into vending machines at night. During one such episode, he makes friends with a group of boys from school who are perplexed by Yu’s pathetic desire to commit sins and introduce him to an old pervert named Lloyd, an expert at upskirt photography, who gladly passes on his craft to Yu. As expected, Yu’s newly discovered ways to sin, the audacity of his confessions and the panty-shot bit in particular enrage Tetsu, who actually hits his son, which makes Yu delirious with joy. This goes on until one day Saori reappears, causing Tetsu to become disinterested in Yu’s sins. Yet, Yu continues with his dirty new hobby, although he derives no sexual pleasure from it. 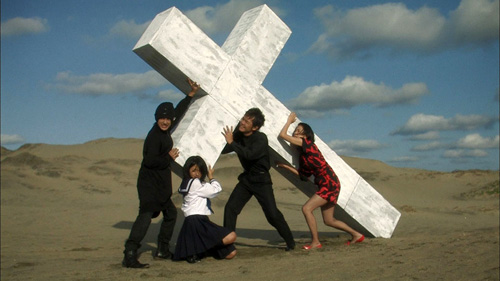 It is at this point in the story that Yoko (Hikari Mitsushima), Saori’s traumatized stepdaughter, enters the picture when she accidentally meets Yu disguised as a cross-dressing “Miss Scorpion” during a street fight with thugs sent by the evil vixen Aya Koike (Sakura Ando), who secretly deals narcotics to fund her own cultist organization called the Zero Church. Yu is instantly attracted to Yoko as he believes her to be Maria, the ideal woman his dying mother told him to look for, and for whom he has been saving a small statuette of the Virgin Mary. Yoko, however, is disgusted by men in general and Yu in particular thanks to his perverse hobby. To complicate matters further, Yoko moves into Yu’s house as Tetsu prepares to wed Saori. Meanwhile, Aya Koike has her own plans for Yu as she plots to kidnap his new family members and convert them to the occult religion of the Zero Church.

In short, Love Exposure is a film that asks the audience to completely suspend its beliefs, constantly defying genre categorization and challenging the viewer as Sono expertly softens his bold approach to traditionally taboo subjects and surprisingly provocative direction with elements of light comedy and bits of action to achieve excellent results. While clearly not for everyone, this is obviously a must-see for otaku enthusiasts as well as fans of modern Japanese cinema and a safe bet for anyone open to seeing something experimental and radically different from the rest.

Coming back from a screening of the Russian anime co-production with Japan's Studio 4°C First Squad at the San Diego...