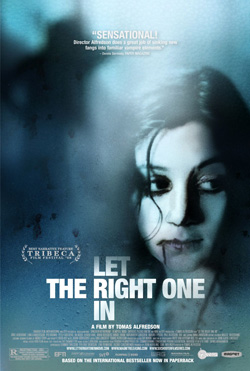 Strangeness abounds in the otherworldly vampire love story Let the Right One In from Swedish director Tomas Alfredson. However, while the film has been justly praised for its foreboding atmosphere, actual substance that would have made the whole trip worthwhile is clearly on the low side. The dull surroundings of bleak 1970s Sweden and boring snail-paced story echo Takahisa Zeze’s pitiful pop-star commercial Moon Child (2003) rather than the works of true auteurs, such as Ingmar Bergman, Quentin Tarantino or Clint Eastwood. The annoying child actors, with their pale faces, do little to add to the film through their forced dialogues.

Building on themes explored earlier in Ondskan (2003), the film tells the story of Oskar, a twelve year old boy who is constantly bullied at school and eventually begins experiencing urges to kill people. Oskar’s malevolent tendencies are compounded by news reports of a serial killer who drains the blood of his victims and his obsession with violence which drives him to piece together a collection of newspaper cutouts dealing with murder and gore. One day, while wielding a knife and making threats to a tree trunk, Oskar meets his neighbor Eli and falls in love with her. Yet, right away Eli tells Oskar they cannot be friends. 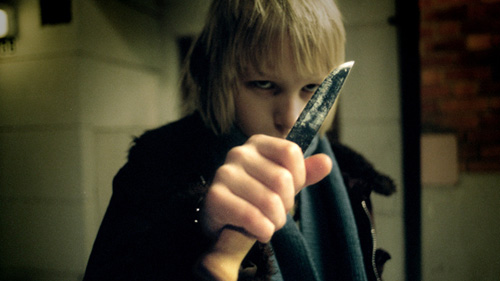 As Oskar gets to know Eli a bit better, we learn that Eli is actually a vampire and that this is the reason they can never be together. In what is perhaps the film’s most brilliant scene, Eli asks Oskar if he would still like her if she were not a girl, to which Oskar replies vaguely “I guess so”. From this point on, things decidedly go downhill as Eli finds out Oskar is being bullied and encourages him to fight back. Oskar takes her advice and cuts the left ear of the main bully with a pole. A bit later, he is lured to the swimming pool at school’s gym and confronted there by the injured bully and his friends. Oskar almost drowns, but to his rescue comes Eli chopping up the assailants and severing their heads in a gruesome expose that was completely unnecessary. Oskar then runs away from home and his uncaring parents with the vampire girl Eli. 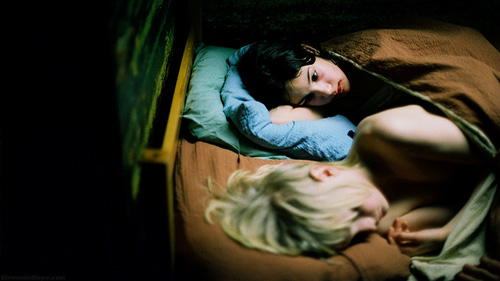 As a horror film, this fails miserably as there are far superior examples of the genre out there – Audition (1999), Calvaire (2004), and the more commercial Wrong Turn (2003), to name a few. As a love story, Let the Right One In lacks exposition and depth. Unlike Ondskan, this can hardly be described as offering constructive social commentary on the Swedish school system due to its abundance of supernatural elements and Oskar’s pop-star looks. This leaves the film in rather unfamiliar territory at the intersection of cinematic genres. Recommended to fans of vampire flicks and pretentious unconventional cinema; others would be best advised to stay away.