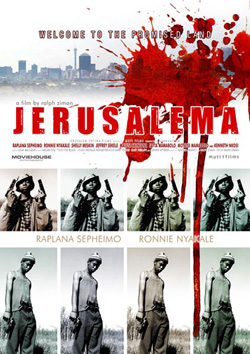 Every once in a while a bold new picture from the most unexpected corner of the world hits the international film scene baffling film critics and surpassing the audience’s wildest expectations. Such is the case with Ralph Ziman’s gritty crime thriller Jerusalema, set in post-apartheid South Africa. Clearly on par with the likes of contemporary classics City of God (2002), Tropa de Elite (2007) and the more recent Slumdog Millionaire (2008), Jerusalema tells the story of self-proclaimed gangster Lucky Kunene, his spectacular rise from poverty to power, and the illegal empire he built amid the Hillbrow slums of modern Johannesburg.

From its opening shots, Jerusalema – much like its mostly Brazilian genre predecessors – shocks the audience with its raw intensity, unflinching realism and de-aestheticized portrayal of social inequality. As if to intensify shock value and make the picture even more potent, the film is based on true events resulting in a unique cross between José Padilha’s cult classic Tropa de Elite and Jean-Stéphane Sauvaire’s more recent work Johnny Mad Dog (2008). However, while the rampant car theft, appalling living conditions, dysfunctional legal system and general state of corruption shown certainly paint South Africa in a less than favorable light, it is precisely the presence of these controversial elements that make the work a landmark achievement in South African and world cinema.

The plot roughly follows the life of Lucky Kunene (Rapulana Seiphemo), who starts out as an ambitious Soweto teenager looking for ways to fund his college education and eventually ends up behind bars on multiple homicide charges. As youngsters, Kunene and his best friend Zakes (Motlatsi Mahloko) struggle to earn their way out of the oppressive poverty that surrounds them. Seeing their legitimate efforts fail one after another, they reluctantly turn to illegal alternatives and begin performing “affirmative repossession” activities (stealing cars) for the local Russia-educated crime boss Nazareth (Jeffrey Sekele), a disillusioned ANC guerilla used to solving problems via the AK-47.

Although very profitable, their criminal involvements put the boys on a dangerous collision course with the local police and private security forces. After a robbery goes wrong one day, the pair are forced to flee to Johannesburg. Once there, the two start up a pirate taxi business, which soon falls apart when they are attacked by thugs from a rival “firm” and their taxi is stolen. Kunene thus returns to a life of crime, but this time around he goes for the bigger fish by repossessing dilapidated Hillbrow apartment blocks from their white owners through questionable practices that ultimately amount to a legalized form of extortion. As his fortune and fame grow, Kunene allows himself to be distracted by an affair and begins to lose control of his no-drugs policy for the apartment buildings, which puts him on a slippery slope and ultimately leads to his downfall.

With Jerusalema, director Ralph Ziman paints a devastating yet deeply human picture of an impoverished nation torn apart by organized crime and the specter of racial intolerance. However, the film is much more than a palpable crime thriller as it quite possibly represents an important turning point, a cultural revolution in South African cinema. The highly controversial nature of the work, its matter-of-fact approach to difficult subject matter and remarkable willingness to shed light on some of the less savory aspects of life in the new South Africa all signal a maturation of the country’s film industry and a significant evolution from earlier, less confrontational works such as Tsotsi (2005) and The Wooden Camera (2003).

While admittedly formulaic and replete with rather cliché plot devices, The Town, starring Rebecca Hall and Ben Affleck in the...