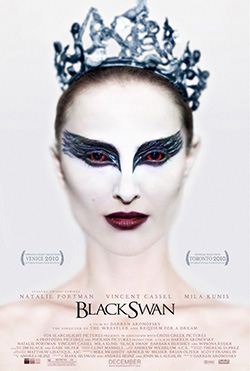 Darren Aronofsky’s Black Swan is nothing short of a masterpiece, a complex yet incredibly dark, frenetic noir classic. Given the Woody Allen subject matter of this unromantically barren, magnetically grim picture entirely devoid of positive characters, the nasty surprises lurking in the many plot twists – be they the product of drug-induced hallucinations or flashes of real life desperation – quickly become rather routine, losing their shock value and producing only a muted emotional response. For those who care to follow through, however, the work delivers on all counts; the less attentive among us will find Black Swan to be the perfect remedy for insomnia.

As the film opens, Nina Sayers (Natalie Portman) is spending countless hours in a New York City ballet studio practicing for the part of Swan Queen in her French dance instructor Thomas Leroy’s (Vincent Cassel) upcoming novel take on Swan Lake. Kind, hardworking and good-natured, Nina excels in her portrayal of the White Swan; it is the Black Swan portion of the performance that seems to give her the most trouble. When Rebecca, the former Black Swan contender, suddenly leaves the studio and is replaced by newcomer Lily (Mila Kunis), Nina finds herself seriously challenged for the part of Swan Queen. Lily is just the opposite of Nina – she is darkly mysterious, seductive and aggressive – and naturally more talented as the Black Swan. To compound this already stressful situation, Thomas Leroy announces to Nina in private he is about to make Lily the Swan Queen and then – after his awkward attempt to kiss Nina goes awry – ends up unexpectedly awarding her the part. 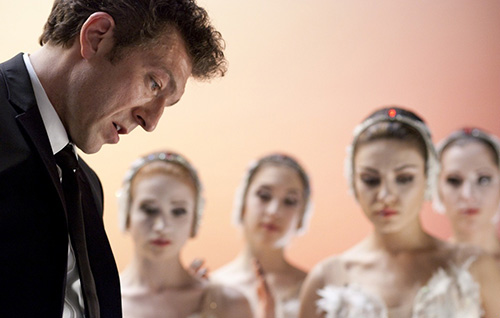 Nina struggles to embody the spirit of both the White and the Black Swan, a formidable goal that gradually takes over her whole life and becomes its sole purpose. With pressure building by the day, she tries to keep her frustrations to herself, relentlessly practicing her steps and replying with a curt “I’m fine” whenever others care to inquire. Thomas Leroy never lets up in pushing Nina to her limit, telling her to “attack it, attack it” and always finding faults with her depiction of the Black Swan. All the while he calls her “my little princess,” an honorary title Nina inherits from retiring former Swan Queen Beth, and makes vague sexual advances towards the young ballerina. After her initial belligerence wears off, Lily pretends to warm up to Nina a bit and, while remaining deeply jealous, makes superficial attempts to become friends. Nina’s sanity starts to slowly give away from all the pressure that surrounds her and the night before her final rehearsal she agrees – in an act of rebellion as well as desperation – to go out for drinks with Lily. Events naturally take an ugly turn and from this point on spin rapidly out of control. 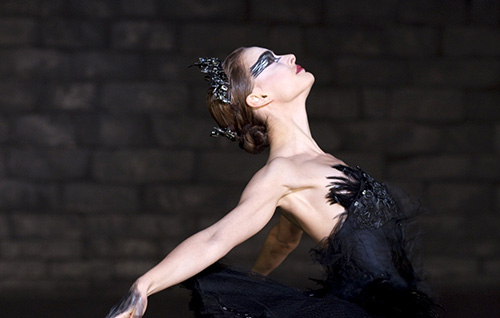 The winner of several coveted awards on the independent film circuit, Black Swan is a prominent example of a character study done right, the unmistakable work of a true auteur. Beautiful cinematography, near-perfect acting and expertly choreographed dance routines give the picture a classy, professional finish with the filmmakers paying equally meticulous attention to both style and substance.

Watching Black Swan would be difficult to describe as an entertaining experience, yet the film most certainly intrigues, even fascinates, with the scope and depth of human conceitedness it manages to reveal. However, while the work touches on a range of subjects, its central message proves curiously elusive as plenty of open ends remain by the time the credits roll. Is the director trying to suggest that everyone has an agenda and no one should be trusted? Or that evil is not an innate personality trait, but rather an acquired characteristic, the product of a mind corrupted by psychologically traumatizing experiences? Or is this simply a cautionary tale about taking the search for perfection to an extreme? Whatever the case may be, Nina’s transformation from innocent White Swan to ominous Black Swan, the pure embodiment of evil, and her concurrent descent into madness, which forms the backbone of the film, are absolutely unforgettable, making this offering an excellent choice for its niche audience.