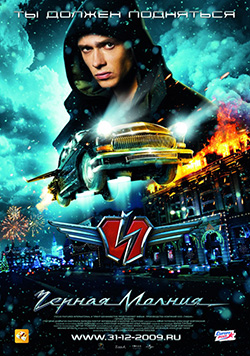 Timur Bekmambetov’s return to the big screen in Russia after a two year hiatus – albeit this time in a production role – Black Lightning (Chernaya Molniya) epitomizes the emerging sci-fi trend in Russian cinema exemplified by such earlier films as Night Watch (2004), Day Watch (2006) and the more recent Inhabited Island (2008). With plenty of action, a story built around a flying vintage car and presentation bordering on magical realism, the film appears to have all the makings of a modern classic, yet neither the superfluous special effects nor the production budget of $8 million manage to save it from falling flat on its face.

Dima (Grigoriy Dobrygin), a shy twenty-something-year-old student at the prestigious Moscow State University, lives at home with his parents and dreams of one day owning his own car, which would finally allow him to catch up image-wise with his “cooler” friends and make him a viable relationship partner for the popular girls at his school. His wish is granted when Dima’s father buys him a car for his birthday, but to our protagonist’s dismay that car turns out to be an old vintage Volga rather than the brand new BMW he had been hoping for. Still, Dima is happy to be driving and soon gets himself a job delivering flower bouquets, at the advise of successful local businessman Kuptsov (Viktor Verzhbitskiy) who makes a guest appearance in one of his college classes. 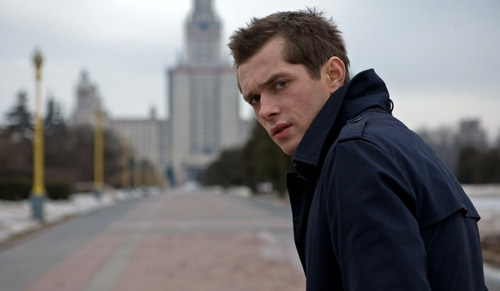 Dima’s initial lack of enthusiasm, however, gives away to pure delight when he accidentally discovers the old Volga can fly, performing vertical takeoffs and rooftop landings. Particularly useful for flying around Moscow traffic jams, this nonstandard feature of the Volga enables Dima to rapidly excel at his new job, giving him the confidence and money to finally ask out Nastya (Ekaterina Vilkova), to the extreme disappointment of his self-assured, rich and snobby competitor Maks (Ivan Zhidkov).

Trouble does not take long to show up, however, when it turns out Kuptsov and his men are in fact trying to hunt down Dima’s flying old Volga in order to retrieve its nano fuel processor. Using this powerful device, the morally bankrupt businessman plans to drill through the bedrock underneath the city of Moscow – putting millions of lives at stake – to gain access to vast underground diamond deposits. As one might expect, Dima is the only man capable of stopping the evil genius and that’s exactly what he does.

The paper-thin lead characters Dima and Nastya are so painfully average, predictable and well-groomed one might seriously be led to wonder if they came out of a test tube. Particularly priceless is the scene in which Dima saves Nastya from a falling icicle by smashing it in mid-air with his car, minutes after setting up a date with her for New Year’s. As Dima’s Volga swooshes overhead, Nastya is showered with rose petals and a nicely wrapped bouquet falls at her feet in what must be the cheesiest romantic moment in the history of modern cinema. 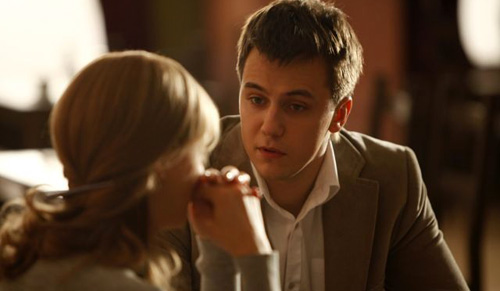 Produced by Timur Bekmambetov with involvement from Universal and Focus Features International, Black Lighting lends itself to high audience expectations as a film of certain class – quite intentionally, it would seem. However, the blatant brand placement that appears throughout the picture complemented by heavy reliance on retro-style ’80 special effects would seem to indicate otherwise. Unscrupulously marketed is everything from Mentos breath mints to BMWs, making one begin to seriously wonder about the directors’ motives for making this film at all given its virtual lack of plot. Yet the ultimate cheesy moment comes in the form of a semi-pathetic comment Dima’s father makes about his son’s new Volga being “just like Putin’s”. Following this, anyone looking to enjoy Black Lightning would be well advised to turn off their brain and thus suspend the overflowing sense of disbelief for the rest of the cinematic experience.

An unlikely cross between several genres that seeks to combine the action of Spider Man (2002) with the sci-fi story of Night Watch and the romance of Piter FM (2004), Black Lightning is a brave and original attempt that, unfortunately, fails just as spectacularly as it looks. The abundance of far better sci-fi action films with superior special effects and romantic comedies with non-brain-dead characters renders this work highly derivative and lacking real imagination.