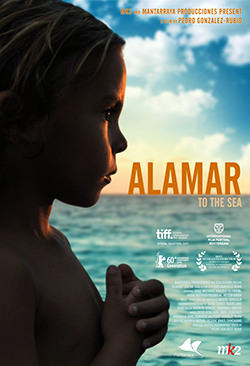 Director Pedro González-Rubio’s debut film Alamar is nothing short of a contemporary masterpiece. Deceptively simple in structure, its story woven around a Mexican father and his half-Italian son embarking on a trip to the coral reefs of Banco Chinchorro ahead of their impending separation, the work is infused with a delightful authenticity edging on neo-realist themes thanks to González-Rubio’s ethnographic film making approach. The discerning viewer, however, will be sure to identify in the picture a rich subtext built around the motifs of man’s relationship with nature and the ongoing struggle between prevailing traditionalism and the impermanence of modernity.

In the aftermath of their failed attempt at sharing an idyllic beach life in Mexico, Jorge (Jorge Machado), a young man of Mayan ancestry, meets one last time with the Italian Roberta (Roberta Palombini) before her planned departure for Italy with their son Natan (Natan Machado Palombini). Before the farewell, Jorge decides to take Natan on a trip to the coast, and the two set out by bus to visit the coral reefs of Jorge’s childhood where Natan’s grandfather Matraca (Nestór Marín) still makes a living fishing. Upon their arrival at the sea, Matraca takes the pair on a lobster fishing excursion in the azure blue waters of the Caribbean in his small motor boat. Disconnected from the clutter of the world at large and immersed temporarily in the simplicity of a rudimentary life lived by many generations of their ancestors, Jorge and Natan manage to bond surprisingly well. 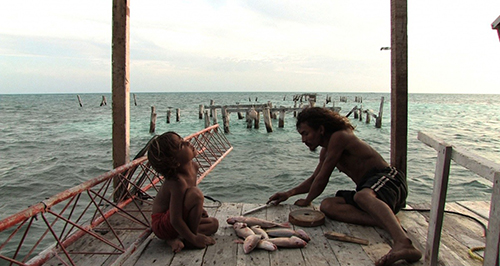 Essentially a sensibly filmed exercise in cultural anthropology, Alamar offers a uniquely personal look into the lives of its characters and their distinctive realities. In a vein somewhat reminiscent of Emanuele Crialese’s Italian drama Respiro (2002) set in a small Sicilian village, the film captures a vivid snapshot of life in a traditional Mexican fishing community where little has changed over the centuries. By implication, the reassuring stability of this traditional mode of existence on the fringes of turbulent modern society and its remarkable resilience to the tests of time raise many more questions about the costs of human progress than the work cares to address. A second recurring theme is the harmonious coexistence between man and the natural world we observe throughout the picture as it forms the backdrop for a smoothly developing relationship between a father and his son. 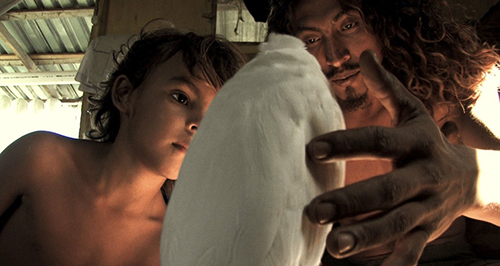 While on the surface Alamar may appear to be a slow-paced family offering set in an exotic locale, at its heart it is a film about cultural identity and the importance of being aware of one’s roots, however remote they may be.

Pedro González-Rubio does an admirable job blending elements of drama, documentary and existentialist commentary to craft an experience so subtly beautiful it will leave the attentive viewer mesmerized. Highly recommended.